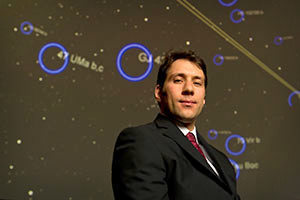 Justin Crepp, the Frank M. Freimann Assistant Professor of Physics, has published an article, “Understanding the galactic context of mankind” on the website Science 2034.  Science 2034 is an initiative from The Science Coalition that asks scientists, policy makers, and thought leaders to share what they think science will do for individuals, society and the world 20 years from now.

“In 2034 I believe we will know the exact location – the galactic address – of all Earth-like planets within the vicinity of the Sun. These are our nearest neighbors. And with somewhat mild weather environments, some fraction of the rocky worlds that we discover could possess the ingredients for life,” Crepp says. He also discusses how this will be accomplished using the Terrestrial Planet Finder (TPF), an advanced starlight suppression system from NASA that will be used to directly image planets that are 10 billion times fainter than their parent stars.

Crepp, an astrophysicist at Notre Dame, develops new technologies and observational techniques to detect sub-stellar companions that orbit nearby stars. His research team is currently developing a new instrument called iLocater, an ultra-precise spectrometer that will be used to identify terrestrial planets orbiting in the habitable zone of nearby stars.

Established in 1994, The Science Coalition is a nonprofit organization consisting of 60 major research universities dedicated to sustaining the federal government’s investment in basic scientific research as a means to stimulate the economy, spur innovation and drive America’s global competitiveness.  The Science 2034 initiative was established to celebrate The Science Coalition’s 20th anniversary.

Originally published by Stephanie Healey at science.nd.edu on October 30, 2014.