iLocater is a planet-finding spectrometer that will be installed on the largest telescope in the world, the Large Binocular Telescope (LBT) in Arizona. Designed to operate in the Y- and J-bands (wavelengths ranging from λ=0.96 - 1.34 μm), the instrument consists of three hardware components: an acquisition camera to collect starlight; a cryogenic, cross-dispersed, R = 170,000 Echelle spectrograph; and an ultra-precise wavelength calibration unit. The acquisition camera collects starlight (one object at a time) from the two LBT 8.4 m diameter primary mirrors and injects that light into separate, single-mode optical fibers, which eliminate a major source of error (modal noise) in radial-velocity measurements. The spectrograph itself is located within the support pier of the telescope to provide stability, while the calibration system compenstates for residual velocity drifts. Further details about iLocater hardware components and its optical design are described below.

The major challenge to enabling a diffraction-limited spectrograph is coupling starlight into single-mode fibers, which are only 6 μm in diameter (one tenth the thickness of a human hair) for the wavelengths at which iLocater operates. This eliminates modal noise (see video), a major source of error in radial velocity measurements. The difficulty in coupling starlight to such a small fiber is due to the distortion caused by Earth's turbulent atmosphere. However, leading-edge instruments that do not correct for the atmosphere already successfully couple to fibers that are 60 μm in diameter (Pepe et al., 2000). With access to the LBT adaptive optics (AO) systems, iLocater will be able to couple to single-mode fibers and achieve an effective spatial resolution that is a factor of ~ 20-30 times that of instruments limited by atmospheric turbulence (seeing-limited). In the Y-band, our images will be roughly 40 mas following correction from the AO system. With this improvement in image quality, efficient coupling should be feasible.

We have developed a "demonstrator system" for on-sky use that will be commissioned at the LBT this winter. Figures 1 and 2 below show 3D CAD renderings (designed by Dr. Jonathan Crass and PhD student Andrew Bechter), and the physical unit (shown on front page of website) is now being tested in our astrophysics laboratory. 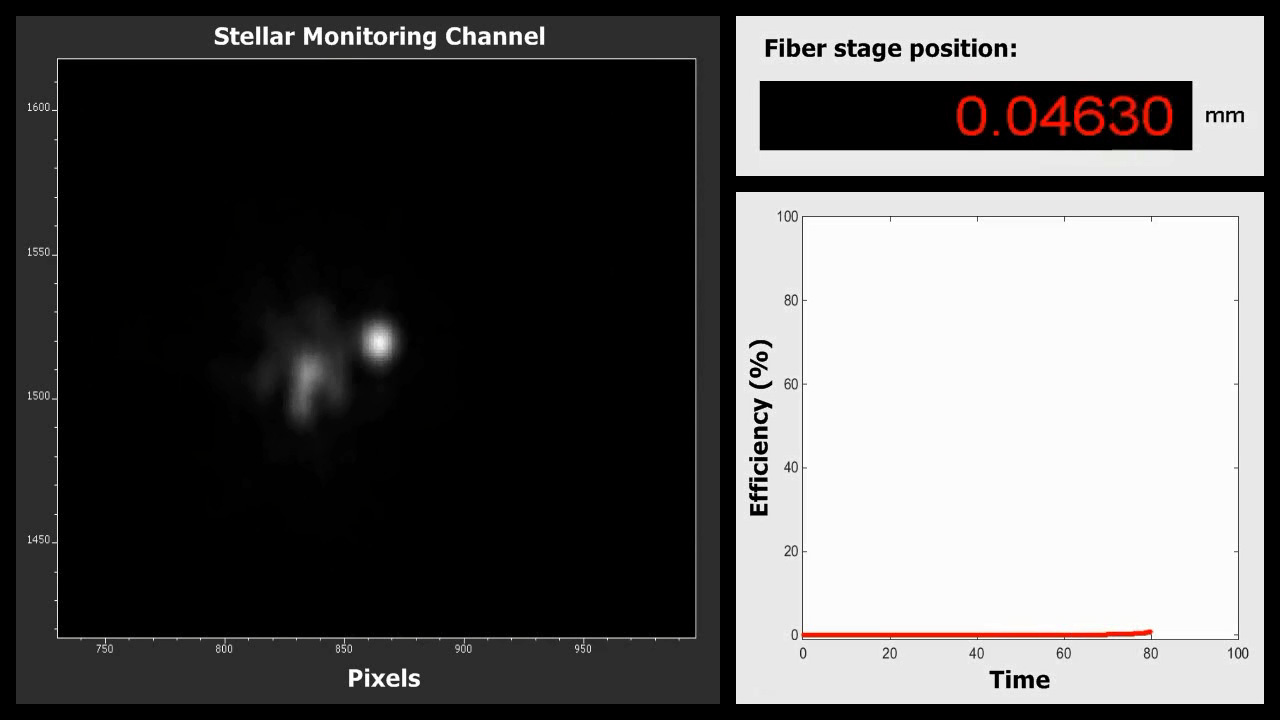 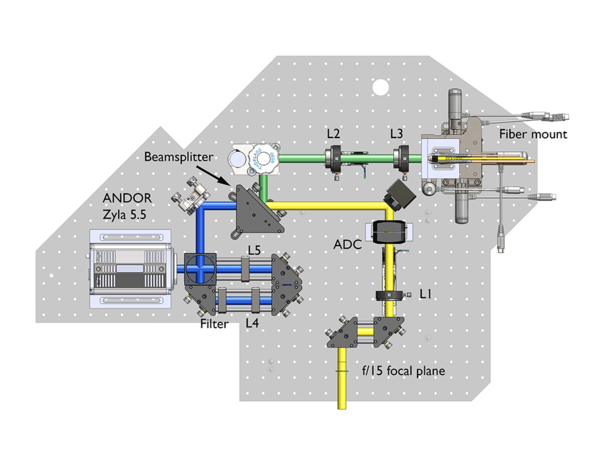 The iLocater demonstration system consists of an acquisition camera and an optical power monitoring system designed for installation on the DX (right) side of the LBT. The acquisition camera is designed principally for single-mode fiber coupling in the Y-band (950 - 1120 nm); all other ancillary functions are designed to assist in optimizing coupling efficiency and maintaining stable alignment. 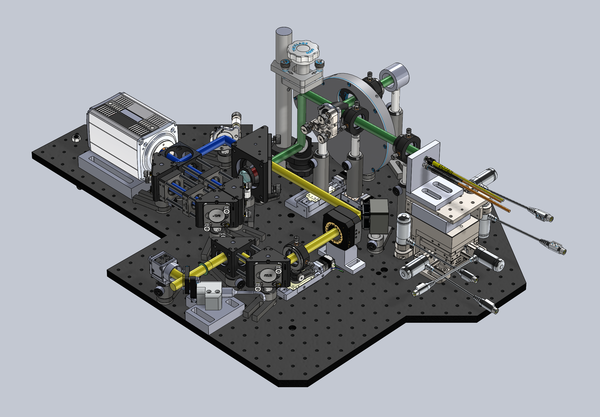 The schematic design of the acquisition camera system shown in Figure 1 can be divided into three sections: common optics (yellow), a fiber coupling arm (green), and an imaging arm (blue). The incident f/15 LBT beam enters at the bottom of the figure and is collimated using an f = 200 mm cemented achromatic lens (L1) to a diameter of 13.4 mm before transmitting through an atmospheric dispersion corrector (ADC) composed of two singlet prisms. For efficient coupling, an ADC must be used to correct for dispersion created by propagation of starlight through the atmosphere. A steering mirror is used to correct for small angular deviations. caused by the ADC as it compensates for different air masses. A laser line beamsplitter acts as the final common optic in the initial optical train, reflecting the science wavelength band to be used in the spectrograph to the fiber coupling arm of the instrument. The transmitted beam propagates through the beamsplitter into an imaging channel (blue) that is used to assist in fiber alignment, monitoring AO residuals, and tracking target star position. For further details, refer to Bechter et al., 2015. 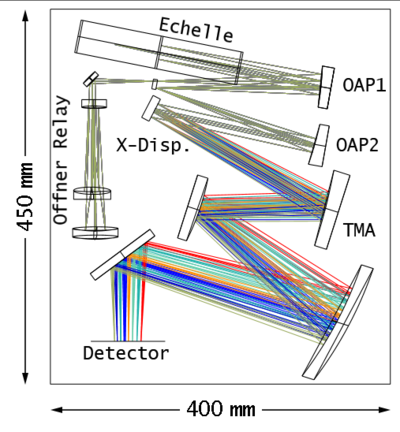 One fiber from each telescope dish enters the spectrograph and is separated in the cross-dispersion direction, providing two simultaneous spectra of the same star in each order. The spectrograph is housed in a vacuum enclosure that is then cooled to a low (60 K) temperature. For the purposes of stability, the spectrometer breadboard and optical mounts are made of Invar (which has a CTE zero-point crossing at 60 K). The spectrograph optical design (Figure 3) is an all-reflective white pupil layout in which each optic is made of Zerodur to facilitate alignment and maintain stability. Finally, the starlight is focused onto a Teledyne H4RG-10 infrared array consisting of 4096 x 4096 pixels. 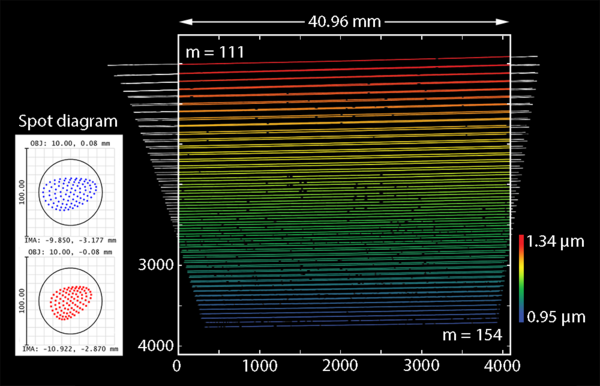 Working at the diffraction limit offers unique advantages for the optical design of planet-finding spectrometers. For example, a small input image does not require a large grating to disperse starlight. Rather, a small, collimated beam may be used to generate spectral resolutions of R = 150,000. This means that we can sample the input stellar spectrum at the level of 7 pm (10-12 m). As a result, the entire instrument dramatically shrinks in size, enabling a compact design that facilitates temperature and pressure stability (Crepp 2014). Furthermore, a small input fiber requires that the image be magnified onto the detector, creating a slow beam at the camera. This results in excellent "diffraction-limited" imaging quality. 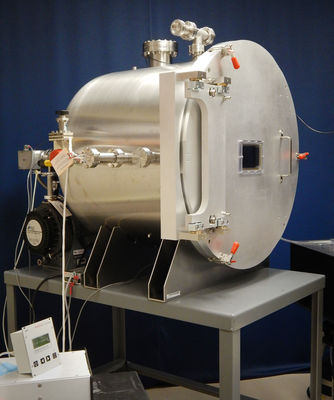 Figure 5. Vacuum test chamber in the laboratory at Notre Dame. This will be used to test vacuum technologies and thermal control strategies.

The infrared wavelengths used for iLocater's science are emitted by everyday objects, so it is vital that this is reduced to ensure starlight, not background radiation, is recorded on the instrument detector. To do this, the spectrograph and detector are placed within a temperature controlled vacuum chamber (also known as a cryostat). Any surfaces visible to the detector are cooled using cryocoolers and copper conduction straps, and the detector itself is cooled to improve its noise characteristics and image quality. The system being housed in a vacuum is important for stability as it minimizes heat transfer by air from the outer walls of the vacuum chamber to the optics of the spectrograph.

We have recently purchased a laboratory vacuum chamber (Figure 5) to test and develop technologies and techniques required to achieve the necessary precision of a radial velocity measurements. To achieve its science goals, the optics of iLocater must remain stable to better than 0.1 mK which requires a closed-loop temperature control system which can correct for changes to the temperature of the outer vacuum chamber before they reach the spectrograph optics.

Despite creating an ultra-stable environment, small residual temperature fluctuations may still introduce spectral variations at the level of the wavelength of light. We will correct for these effects by illuminating the spectrograph with an external wavelength source that is stable to 3 cm/s, allowing the location of specific wavelengths of light to be measured. By comparing these locations to incident starlight, errors can be removed after observations have taken place.

The external wavelength source, or calibration system, is a fiber Fabry-Perot etalon (Schwab et al., 2014). An etalon is a reflective laser cavity that creates a series of regular constructive and destructive interference fringes, whose wavelength can be identified by comparing to a reference, i.e. an elemental resonant absorption wavelength (e.g. rubidium D2 line). The fiber Fabry-Perot light will be injected into the acquisition camera to minimize non-common path errors.